Magnesium is one of the most important nutrients you need for your body to perform optimally.

Research has it that this is the mother-load of all nutrients since it is required to support more than 300 biochemical reactions in the body. The function of magnesium in the body varies from maintaining normal nerve and muscle function, keep the heartbeat steady, help maintain strong bone, to supporting a healthy immune system. Controlled intake of magnesium is also known for adjusting blood glucose levels and aiding the production of energy and proteins in the body.

Current studies indicate that at least 2% have experienced or are experiencing magnesium deficiency, with another 75% recorded not meeting recommended intake. A visit to the doctor may not yield any result since, in some cases, this deficiency may be underdiagnosed since some of the dominant signs may take time to appear, showing only when the condition is at an all-time low. Before dwelling on the consequences and symptoms of magnesium deficiency, let’s highlight the causes. 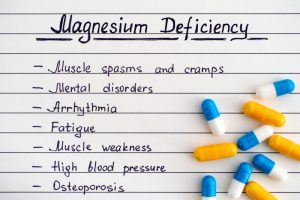 Every part of your body needs the right amount of magnesium, especially your kidneys, muscles, and heart, to operate optimally. Some of the causes of low levels of magnesium include

As indicated above, some of these causes are associated with underlying medical conditions, while others result from poor lifestyle choices.

Here are the 7 signs of a magnesium deficiency.

Tremors, twitches, and muscle cramps could be signs of magnesium deficiency. However, in severe cases, the deficiency may result in convulsions and seizures. Research has it that these symptoms are caused by an increased flow of calcium in the nerve cells, which hyper-stimulates the muscle nerves.

The use of magnesium supplements has been found to be effective in relieving muscle cramps and twitches. However, more research has pointed out that this method is only effective in the younger generation providing little relief for muscle cramps in older adults.

You also need to remember that occasional muscle cramps are normal. However, you may need to schedule a doctor’s appointment when they become too frequent.

Cases of mental health disorders could be an indication of magnesium deficiency. One of these disorders is apathy, which is characterized by a lack of emotions and mental numbness. This disorder is worsened by magnesium deficiency which can cause delirium and even lead to a coma. Research has also associated low magnesium levels with depression, while other researchers are working on relating this deficiency to increased anxiety levels.

There is limited evidence showing that magnesium supplements can help reduce anxiety levels in some people. However, scientists are still working on providing more findings on this research. In summary, it is best to conclude that low magnesium levels in the body could result in nerve dysfunction and even cause mental health issues in retaining people.

Osteoporosis is a disorder associated with weak bones and increases the chances of suffering multiple fractures. There are various problems associated with this disorder, some of which include

Research has shown that magnesium is important for maintaining strong and healthy bones. This means that a low level of magnesium puts you at risk of suffering from osteoporosis. Having low levels of magnesium may weaken your bones directly as well as lower the levels of calcium in your blood, the main nutrients needed for bone growth and development.

Various studies have also shown that deficiency in magnesium results in reduced bone mass as well as bone mineral density.

Fatigue can come as a result of various causes. Both mental and physical exhaustion characterizes this condition. Fatigue should not cause alarm since people are bound to get fatigued from time to time. This can be sorted by a bit of rest. However, when you experience severe and persistent fatigue, you may have to schedule an appointment with the doctor since this may be a sign of an underlying medical condition.

Isolating fatigue as a sign and symptom of magnesium deficiency may be difficult since it presents itself as a non-specific symptom. This symptom can be considered when other symptoms accompany it. Muscle weakness, medically known as myasthenia, is one of the most specific signs of magnesium deficiency. Research has it that this weakness may be caused by low potassium levels in the muscle cells, which is greatly associated with a low level of magnesium in the body. When feeling excessively tired with signs of muscle weakness, it may be time to visit the doctor for a second opinion.

Studies done on animals showed that low magnesium levels could cause a spike in blood pressure resulting in high blood pressure, which is a precursor for heart diseases. On the other hand, observational studies show that magnesium deficiency in your diet increases your chances of experience high blood pressure. Most conclusive studies depicting the benefits of magnesium have been done under controlled environments.

However, the use of supplements has been known to significantly lower blood pressure, especially in adults suffering from high blood pressure. In summary, magnesium deficiency can be associated with increased blood pressure, further putting you at risk of heart diseases. Keep in mind that more research is needed to come up with conclusive data. This means you need to talk to your doctor to have a conclusive report on your condition.

Magnesium deficiency has often been reported in people with severe cases of asthma. Research also shows that magnesium levels are at an all-time low in people with asthma than those without. Studies also show that reduced magnesium levels may result in a buildup of calcium in the muscle lining in the airways leading to the lung. This, in turn, causes the airways to constrict, resulting in breathing difficulties.

To solve this, doctors often prescribe inhalers with magnesium sulfate in cases of server asthma attacks to help individuals relax and expand their airways. However, patients experiencing life-threatening situations may receive injections as the most viable delivery method. Scientists are currently still working on the use of magnesium supplements to manage severe cases of asthma. However, to summarize, experts believe that severe asthma attacks may result from low magnesium levels, thus requiring further investigation to ascertain the exact nature of your condition.

Irregular heartbeat is also referred to as heart arrhythmia. This is the most serious indication of low magnesium levels in the body. Symptoms for irregular heartbeat are usually mild and, at times, may not present any signs. However, in certain people, it may present itself in the form of heart palpitations which can cause your heart to pause in between heartbeats. Other symptoms include

Experts suggest that severe cases of arrhythmia increase the chances of a stroke or even heart failure. These symptoms can be attributed to an imbalance of potassium levels both inside and outside heart muscle cells, a condition closely related to hypomagnesemia.

Various reviews also indicate that patients with congestive heart failure and irregular heartbeats have very low magnesium levels compared to normal people. One of the most effective treatment methods to boost heart function involves the se of magnesium injections. For people suffering from arrhythmia, magnesium supplements can help manage the condition.

Severe cases of magnesium deficiency have been known to lead to chronic illnesses such as hypertension, diabetes, coronary heart disease, and osteoporosis. Doctors have also been known to use magnesium injections and supplements as therapeutic agents for managing conditions such as asthma, myocardial infarction, and pre-eclampsia.

Magnesium Deficiency in the United States

In the United States, many people don’t get enough magnesium. In fact, thirty-four percent of adults and sixty percent of seniors are deficient in the mineral. This is important because: “magnesium deficiency is common in the general population and may be related to anxiety and depression”.

Magnesium deficiency can be caused by: stress, poor diet/food choices/nutrition, and gastrointestinal ailments. Many people need more magnesium than they get from their diet alone.

Since magnesium helps with stress, having deficiency symptoms will make stress worse. In fact, a lack of magnesium has been shown to cause higher levels of anxiety and depression. The authors of one study suggest that: “magnesium deficiency may be an important risk factor for anxiety and depression”. The most common signs of magnesium deficiency include loss of appetite, irritability, muscle cramps, and anxiety. Magnesium helps to regulate GABA levels in the brain. It also helps with serotonin production. Since both GABA and serotonin are calming neurotransmitters, this can explain why magnesium may help reduce anxiety.

Some people are deficient in magnesium because of poor diet choices. This is especially true if they eat a lot of processed or refined foods. Processed foods contain very little magnesium in them compared to more natural foods. Oftentimes, people also don’t get enough magnesium from their food because they aren’t getting enough fruits and vegetables. Strangely, the average person only eats about half of the recommended daily intake of fruits and vegetables per day. This means that even if you eat healthy meals at your house, you may still be lacking in several important nutrients like magnesium.

When we talk about getting enough magnesium for your body, it means you need to know the required daily amount you need to take to ensure you balance out the correct concentration. This is because too much has its disadvantages as well. Magnesium intake varies from one person to another depending on age, gender, and weight. To get the right quantity to consult with your physician.

However, for those who are not comfortable about taking supplements, there are several foods rich in magnesium that can help your meat your daily target of magnesium intake. Some of these are plant-based, while others are animal-sourced. Seeds and nuts are arguably the most reliable source of magnesium. However, beans, whole grains, and leafy green vegetables can supply you with enough magnesium.

Here are some of the best sources of magnesium.

People with health conditions causing them to lose magnesium are encouraged to increase their intake of magnesium-rich foods and supplements. This way, they can replenish most if not all the magnesium lost. Before incorporating magnesium supplements into your diet, it is advisable to consult with your physician on the best diet plan you can implement to ensure you meet your required daily magnesium intake.

Magnesium deficiency is a health condition that has been around for ages. However, it has often been overlooked due to the absence of actionable symptoms. Most symptoms related to this condition are non-specific. This means they can be used to diagnose something entirely different.

Recent studies have revealed that a significant percentage of Americans fall short of their required daily amounts of magnesium. However, cases of magnesium deficiency are estimated to be below 2%. Hypomagnesaemia poses a major challenge to healthcare professionals since most of its symptoms are mild and only present themselves fully when there are severe low levels of magnesium in the body.

8 thoughts on “7 Signs of a Magnesium Deficiency”