The uncomfortable disorder comprises of several intestinal symptoms occurring together and may vary in duration and severity in different people.

Although suffering from IBS does not increase your risk of developing gastrointestinal cancer, Irritable Bowel Syndrome can still have a huge effect on your life.

the number of Americans who experience Irritable Bowel Syndrome ranges between 3% and 20%. On top of that, research shows that this spastic colon disorder occurs at a higher rate in women compared to men.

Irritable Bowel Syndrome can cause some major unpleasant and potentially embarrassing symptoms.

Some people find the symptoms of IBS minor and tolerable. However, Irritable Bowel Syndrome causes some significant symptoms in other people and makes it entirely impossible for them to go about their daily activities.

Here are some of the typical symptoms of Irritable Bowel Syndrome. They include:

In case you are experiencing constipation related to Irritable Bowel Syndrome, you may face the following:

Another symptom caused by Irritable Bowel Syndrome is diarrhea. This is whereby you pass loose stool several times in a single day. IBS-related diarrhea may also make you feel a sense of urgency each time you need to pass a bowel movement.

One of the major symptoms of IBS is abdominal discomfort. This may manifest itself in form of serious stomach cramping after a meal. However, the cramping may die down once you have a bowel movement. Scientists from the NIDDK (National Institute of Diabetes and Digestive and Kidney diseases) suggest that the abdominal pain is caused by some extremely sensitive nerves located in the gut.

This means that in case you have Irritable Bowel Syndrome, the pain signals from your abdomen may be processed differently by the brain compared to other normal pain signals.

Is your stomach often bloated and filled with gas? If so, then you could likely be suffering from IBS.

During abdominal bloating, your midsection tends to feel full and tight which may cause your belly to appear visibly swollen.

Irritable Bowel Syndrome often leads to gas or flatulence. There are foods that when eaten can trigger flatulence and maybe even make it worse. Some of the foods that increase production of gas in the stomach include:

Foods rich in fiber can also cause flatulence. However, there are cases where fiber is helpful in relieving some IBS symptoms. We highly recommend that you speak to your doctor about fiber intake in case you are diagnosed with IBS.

If you notice any mucous in your stool, it could be a potential sign of Irritable Bowel Syndrome. Normally, mucus coats and protects the tender tissues in the GI tract. If you suffer from IBS, you will pass the mucus along with the stool during a bowel movement. 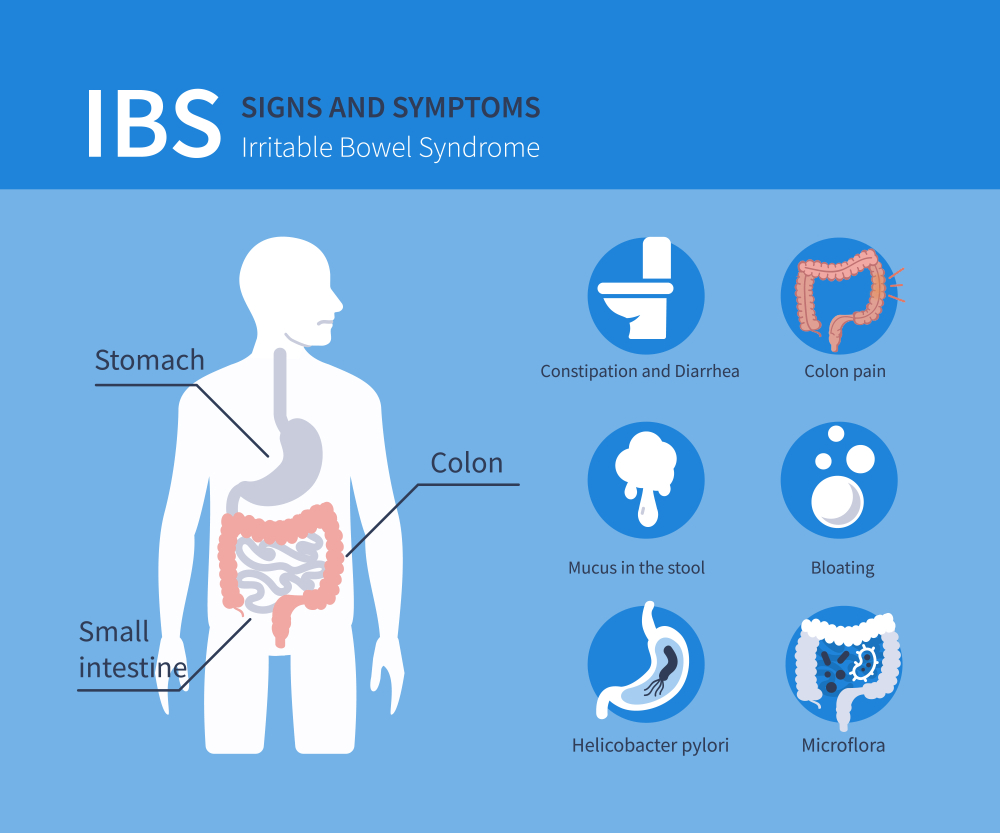 It is important to note that the above IBS symptoms are not always persistent. This is because at times the symptoms may appear to have resolved, only for them to come back again.

Here is a proper breakdown of IBS symptoms in women around the time of menstruation. They include:

Although Irritable Bowel Syndrome has not been directly linked to pregnancy, more than a third of pregnant women have experienced some IBS symptoms in increased intensity. Some of the symptoms include:

As we stated earlier, women tend to suffer more from IBS compared to men. This is attributed to the hormonal differences between men and women, which suggests that the male gut is less sensitive to the symptoms caused by Irritable Bowel Syndrome.

Some of the IBS symptoms that are common in men include:

The pain that one experiences when suffering from Irritable Bowel Syndrome feels a lot like cramping.

Some of the experiences associated with IBS related pain include:

If you have been experiencing majority of the above IBS symptoms, it will really be easy for a doctor to diagnose you with the disorder.

Earlier, we stated that Irritable Bowel Syndrome is made of a variety of symptoms. This makes it hard to diagnose the condition with a single test, thereby requiring the doctor to carry out various tests to diagnose you with IBS. Did you know that about 13.5 American citizens suffer from IBS? out of that number, only half of them are actually diagnosed with the condition. This suggests that a lot of people are struggling with IBS without even knowing it. It is therefore important to go for a checkup if you have been experiencing the symptoms we have mentioned above.

When you visit the doctor for a diagnosis, they will perform a physical examination and compile your entire medical history. This will be followed up by a series of questions to better understand your condition. Some of the questions may include:

In case you are experiencing additional symptoms such as blood in the stool, weight loss, and anemia, the doctor may order diagnostic tests to rule out other conditions. Some of the tests include:

This includes examining a stool sample. It will enable the doctor to rule out the possibility of infection that could be causing your symptoms. If your stool contains parasites or blood, it will indicate that you have an infection instead of Irritable Bowel Syndrome.

The doctor will carry out a blood test by drawing your blood. The blood test will help the doctor confirm that you are not suffering from anemia or any other celiac disease since they may have the same symptoms as IBS. for instance, there is a type of wheat allergy that causes intestinal distress and cramping, symptoms that are similar to Irritable Bowel Syndrome.

In some cases, the doctor may carry out a CT scan on your pelvic region. This will allow them to rule out other possibilities such as gall bladder or pancreatic issues that may be causing abdominal discomfort.

The colonoscopy is a test that your doctor will carry out if they suspect you are suffering from colitis, cancer, or Crohn’s disease (inflammatory bowel disease).

The test allows your doctor to view your colon and rectum using a small camera that is attached to a thin tube.

The thin tube is gently inserted into your anus during the test. You can request for a sedative during the test since it may be quite an uncomfortable experience. A colonoscopy helps the doctor rule out any possibility of cancer especially if you fall into a specific risk group according to your age, family history, or race.

Under this test, the doctor may instruct you to change your diet.

The doctor may recommend that you change the type of food you eat or avoid specific types of foods for a given period of time. This will allow the doctor to rule out any possibility of your food allergies to fully diagnose you with Irritable Bowel Syndrome.

For instance, if your gut is unable to digest dairy products you may experience symptoms such as diarrhea, abdominal bloating, and gas. Lactose intolerance is tested by eliminating dairy products from your diet for a certain period of time or by carrying out a breath test.

If the doctor suspects that there may be blockages in your intestines, they will carry out an X-ray test on your intestines. Before the test begins, the physician will inject a small amount of barium into the intestines using a tube that goes through the anus. Barium will help make your intestines more visible to the X-ray machine.

Due to the nature of the test, you will be required to undergo a liquid diet as well as an enema before the test. Once the procedure is done, you may pass discolored stool and experience some discomfort about two days after the examination. This is normal after a lower GI series test.

Unfortunately, there is no specific cure for Irritable Bowel Syndrome. However, there are several forms of treatment that are aimed at relieving the symptoms of the disorder.

The main forms of treatment that we recommend are two; home remedies and medication. Check them out below.

If you have been diagnosed with IBS or suspect that you are suffering from the disorder, there are certain home remedies that you can try to relieve the symptoms without taking any medication.

Some of the home remedies include:

In case you visit a doctor and are diagnosed with IBS, the doctor may prescribe some medication to help ease the IBS symptoms. Some of the prescribed medicine may include anticonstipation drugs, antibiotics, tricyclic antidepressants to reduce the pain, and medications to control muscle spasms.

Do you have any questions about Irritable Bowel Syndrome? Reach out to us today and we will help you out.