Magnesium (Mg) is an electrolyte similar to sodium, potassium, and calcium with an atomic number 12.

It is a naturally occurring mineral found in the earth, sea, animals, plants, and humans. The mineral compound plays important role in body and brain health. In fact, it is a cofactor in more than 300 bodily functions or processes, according to the National Institutes of Health Office of Dietary Supplements. 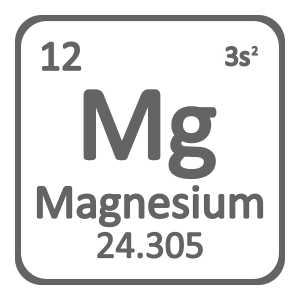 There are many foods that supply magnesium to the body but it can also be found in dietary magnensium supplements and some medicines such as laxatives and antacids. Despite this, chances are your body is deficient in magnesium if you’re not getting enough on a daily basis from foods or supplements. Excessive losses of magnesium due to certain health conditions, chronic alcoholism, or taking certain medications may also result in a deficiency. Low levels of Mg on a long-term basis may have health consequences.

The importance of magnesium has been widely studied. Here are 11 evidence-based health benefits you may find surprising. You’ll also learn about how much magnesium you need per day, how to increase intake, and what foods are good sources of the mineral.

1. Magnesium Assists in Numerous Biochemical Reactions in the Body

Magnesium takes part in hundreds of enzymatic reactions in the body, which may explain why it is found in every body cell. More than half the amount in your body is found in bone. The rest is distributed in the muscles, soft tissues, blood, and other bodily fluids.

Mg is necessary for protein formation, controlling glucose, regulating blood pressure, nerve and muscle function, energy production, bone development, and synthesizing DNA. Your body also needs it to help carry calcium and potassium ions to the cells in order to facilitate functions such as muscle contraction and regulating heart rhythm. Additionally, it plays an important role in the prevention and treatment of various diseases.

Studies show that adults and children who consume less than the Recommended Dietary Allowance (RDA) are two times more likely to have high levels of C-reactive protein (CRP), which is a strong inflammation marker. As such, getting enough of the mineral into your system may help modulate immune system response and reduce the chances of inflammation-related illnesses.

People with or at risk of type-2 diabetes may not realize the importance of Mg in their diet. One study that spanned 20 years and involved more than 4000 participants found that those who consumed the highest levels of magnesium lowered their chances of diabetes. The participants were young adults between the ages of 18-30.

Meanwhile, almost half the participants in a study with type 2 diabetes also had low levels of magnesium in their blood. This can interfere with your body’s ability to control blood glucose levels. It is important to note that magnesium supplements do not improve blood sugar or insulin sensitivity in people who have adequate levels of the mineral in their system.

Magnesium supplementation seems to have no effect on individuals with normal blood pressure or who are non-diabetic. Notwithstanding, by decreasing BP levels, magnesium can also reduce the risk of cardiovascular disease and stroke.

Magnesium is needed for proper brain function and also helps stabilize mood. As such, the risk of depression may go up, particularly in younger adults, if there isn’t enough of it in the body. Depression is a mood disorder. It affects millions of Americans and can interfere with their quality of life if not treated or managed. Doctors typically prescribe antidepressants as a primary treatment for depression. Non-drug treatments include behavioral therapy.

Interestingly, a study found that supplementing with the mineral (glycinate or taurinate) can dramatically reduce depression symptoms in some cases. Furthermore, adults with depression who took 450 mg of magnesium daily saw an improvement in mood similar to relief provided by antidepressant drugs.

Many people battling depression are also diagnosed with anxiety. Chronic anxiety coupled with stress can be disabling and often prevent the individual from carrying out functions of daily living. There may also be a link between anxiety and magnesium deficits. As such, boosting intake levels may help keep stress and anxiety at bay.

Magnesium assists in regulating the body’s fight or flight response to stress which tends to trigger anxiety attacks. The mineral can suppress the release of cortisol and adrenaline and prevent these stress hormones from reaching the brain. Magnesium may very well be a “chill pill” as it works to balance the neurotransmitters glutamate and gamma-aminobutyric acid (GAMA).

People may experience frequent migraines because of a lack of magnesium. Migraine is a type of headache usually accompanied by nausea, vomiting, and light sensitivity. These symptoms can be debilitating. Some scientists believe the underlying cause is a restriction of blood flow to the brain. However, low levels of magnesium in the body may play a role.

One study even suggests that migraine sufferers should be treated with at least oral magnesium. 1 gram of magnesium sulfate has been shown to effectively relieve an acute migraine attack faster than certain migraine medications. Not only that, but the mineral may also work to prevent the onset of migraine headaches.

You probably heard someone in your home or social circle say they need to get some magnesium for constipation. People have been taking magnesium oxide, citrate, or sulfate for centuries as a natural way to improve bowel movement. Some doctors recommend or prescribe it to patients getting ready for a colonoscopy. Apparently, these mineral variations stimulate bowel movement by relaxing the muscles in the intestines.

Adequate intake of magnesium oxide may reduce the amount of time digested food takes to travel through the colon as well as improve stool consistency. One study that assessed various treatments for chronic constipation stated that magnesium oxide works because it functions like osmotic laxatives. These are laxatives that retain water in the colon which increases stool volume and decreases consistency.

Bone structure development is one of the important functions of magnesium in the body. In fact, the mineral is a component of your bones. That’s why supplementing your diet with magnesium can make a difference in the prevention of bone fractures. People are more at risk of fracture due to age, gender, genetics, or a family history of osteoporosis or brittle bone disease (osteogenesis imperfecta).

Men with low serum magnesium levels were at risk of bone fracture according to a 2017 study published in the European Journal of Epidemiology. Another study concluded that women who met the recommended Mg intake decreased their risk of future fractures related to osteoporosis by 27%.

Supplementation or increasing magnesium intake through foods will have beneficial effects on exercise performance in people who are deficient. When you’re exercising, blood sugar needs to move into your muscles to provide the body with more energy. Magnesium aids this process while getting rid of lactate at the same time. The spin-off can be a boost in performance. Otherwise, you may feel fatigued during exercise if your body has low levels of magnesium.

Even if you’re not exercising, the body still needs about 10-20% more of the mineral when you’re active than when you’re at rest. Several studies confirmed the effects of magnesium on sports performance. Athletes who took magnesium orotate supplements for four weeks saw faster performance times in swimming, cycling, and running. Improvements were also seen in volleyball players who took 250 mg of magnesium.

Apparently, the mineral enhances the body’s ability to use glucose for metabolic processes such as energy production.

Premenstrual syndrome (PMS) is a disorder most women of childbearing age are faced with. Symptoms include abdominal cramps, nausea, mood changes, headache, and bloating from water retention. The symptoms usually subside within 48 hours for many women. But in severe cases, PMS can be debilitating or interfere with a woman’s quality of life.

PMS is also associated with anxiety and depression. Doctors may prescribe medications or supplements to patients with moderate to severe PMS. Interestingly, magnesium is one of the recommended supplements.

Signs and Symptoms of Magnesium Deficiency

A clinical evaluation along with lab tests are considered effective ways of determining magnesium levels in the body. Your doctor may also check for the following early signs or symptoms of deficiency:

How Much Magnesium Do You Need Daily?

The recommended amount of magnesium varies by age and sex. Here’s a snapshot of what adult men and women need daily as recommended by the National Institutes of Health Office of Dietary Supplements.

Pregnant women between the ages of 19 and 50 need about 40 to 50 mg more than the usual recommended dietary allowance (RDA).

How to Increase Magnesium Intake

Magnesium is found in a wide variety of foods. Here are 10 foods rich in the mineral: 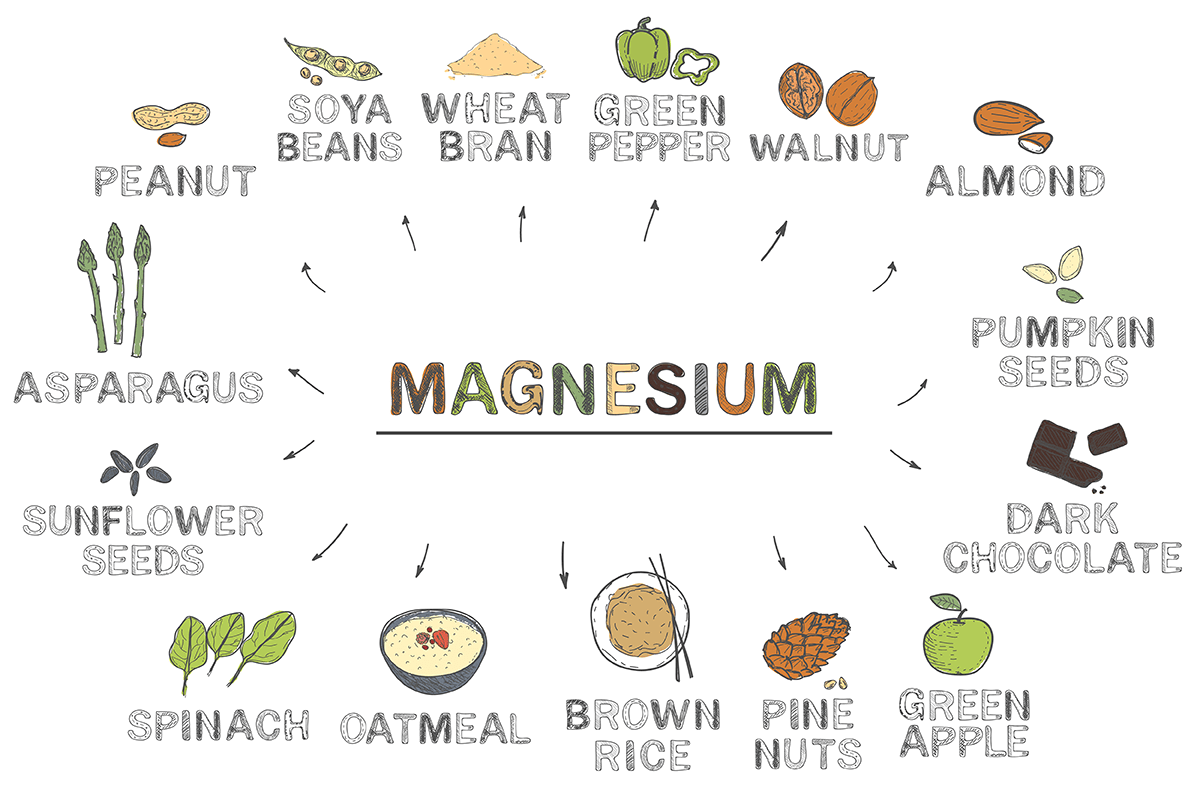 Peanuts and chia seeds contain the most magnesium of all the foods on the above list. Peanuts deliver 156 mg per serving while chia seeds provide 111 mg per serving. Feel free to check out this comprehensive list of foods containing magnesium.

Side Effects of Excessive Magnesium

Magnesium supplements may not be right for everyone. For instance, it may cause adverse effects in patients with kidney disease. Meanwhile, excessive intake may lead to unwanted side effects or health complications. For example, high doses of dietary Mg supplements or medications may cause diarrhea, nausea, or abdominal cramping. Very large doses can lead to magnesium toxicity. Symptoms of the condition include hypotension, facial flushing, nausea, vomiting, trouble breathing, irregular heartbeat, and cardiac arrest.

Magnesium is a necessity for the body. Luckily, it is found in abundance in animal and plant foods as well as water. Other sources are dietary supplements and medicines. Adequate intake can help reduce the risks of chronic conditions or diseases linked to magnesium deficiency. But it is important to take the recommended dietary allowance suitable for you. Consider talking with your doctor or healthcare professional before supplementing with magnesium as excessive amounts can affect your health or worsen an existing medical condition.