The gut-brain axis consists of multiple connections that involve the vagus nerve, immune system, endocrine system (hypothalamic-pituitary-adrenal axis), and the autonomous nervous system. Dysbiosis (alteration of gut microbiomes) results in gastrointestinal disorders and a host of other diseases affecting other distal organs. Dysbiosis interferes with the gastro-immuno-endocrine-neuro communication pathways leading to central nervous disorders such as autism, depression, and anxiety in patients.

This piece explores the relationship between the brain and the gut and suggests improving the gut microbiome.

What is the gut microbiome? 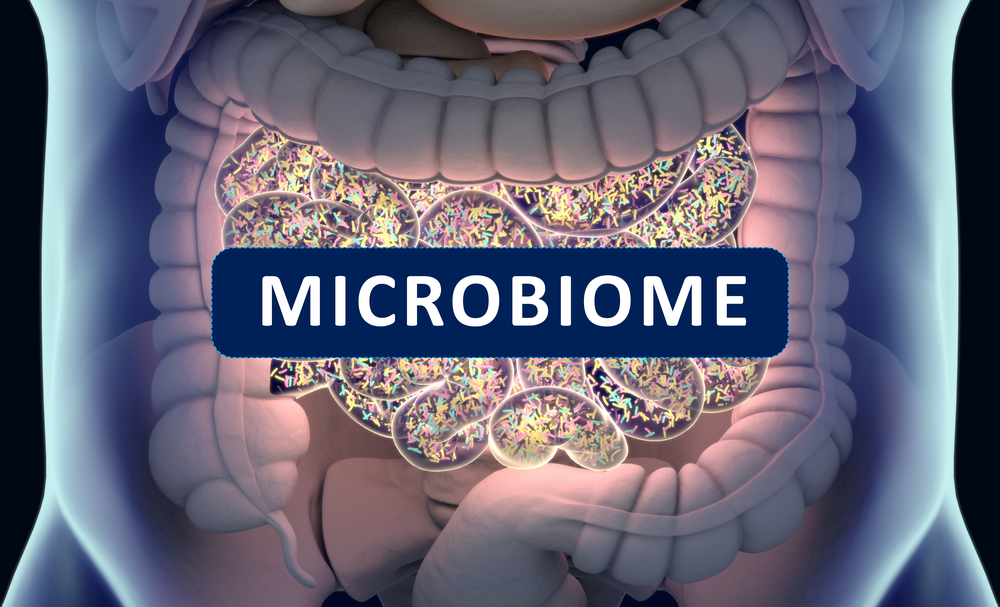 Although many different microbiomes exist in the human body, researchers mostly focus on bacteria compositions. The gut microbiota comprises thousands of bacteria species, each playing a unique role in the human body. While some bacteria are harmful and may cause gut diseases, most are beneficial bacteria critical to maintaining good gut health.

However, the composition of gut microbiomes varies across different potions of the digestive tract. Most gut microbes lie in a pocket of space within the colon, called the cecum. The colon contains the highest microbial density, more than all other body organs combined. In human beings, the gut flora begins to form at least a year after birth, when the intestinal epithelium and mucosal barriers have fully developed.

The composition of gut microbiomes changes over time and is largely influenced by changes in diet and an individual’s overall health. Researchers estimate that the genes in the gut flora are ten times more than the entire cells in your body. Collectively, the microorganisms living in the digestive tract weigh around four pounds, which is the typical weight of a human brain. Together, these microbiota function like an extra body organ playing a key role in immunity, nutrition, and mental wellbeing.

How are the gut and brain connected?

The gut is home to millions of neurons that connect to your brain via certain nerves in the nervous system. Neurons rely on chemical signals and electrical impulses to relay information between the nervous system and certain brain parts. The vagus nerve is the organ that connects the brain to the digestive tract. The nerve facilitates the passage of signals between the brain and gut. 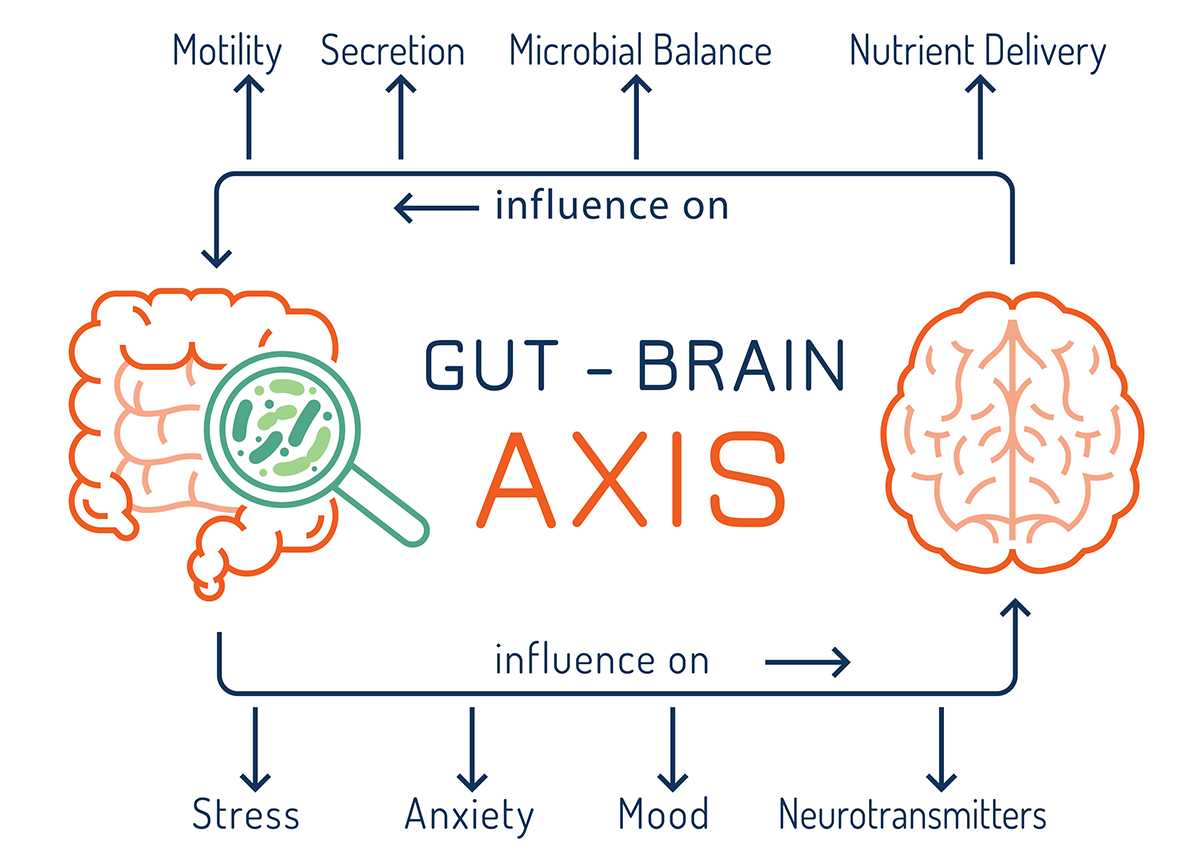 The second way the brain and gut are connected is through neurotransmitters. Neurotransmitters are chemical substances neurons secrete to relay messages to other organs across the synapse. The information exchange between neurons occurs in the synaptic cleft, a tiny gap between synapses.

Probiotics, prebiotics, and the gut-brain axis

Probiotics refer to many types of live bacteria and yeast, which, when consumed, improve gut health. Probiotics are available as supplements but are also present in yogurts and many fermented foods. Doctors and nutritionists sometimes recommend probiotics to patients with digestive tract disorders. While probiotics contain many forms of bacteria, lactobacillus and Bifidobacterium are the most bacteria in many probiotic supplements.

What does the gut microbiome benefit?

A healthy gut microbiome lowers the risk of diabetes.

Serotonin, a neurotransmitter that controls feelings of happiness, is produced by both brain cells and gut cells. Researchers believe up to 90 % of the neurotransmitter is produced by gut cells. Serotonin production boosts mood while helping to suppress anxiety and depression. Taking probiotics can improve gut health and thus improve the outcome of people with major depression disorder (MDD).

How to improve gut microbiome

Below are some ways you can improve your gut microbiome:

Eating a balanced diet comprising diverse foods helps establish microbiome diversity, a key indicator of a healthy gut. The more species of helpful bacteria you have in your gut, the more benefits you stand to gain. Unfortunately, most urban diets score lowly in diversity while being overly saturated with fats and processed sugars.

In comparison, rural diets tend to be richer and more diverse. As a result, people who dwell in rural parts of Africa, Asia, and South America are likely to have better gut microbiome diversity than urban dwellers in North America and Europe.

Fruits and green leafy vegetables pack many nutrients vital in maintaining a healthy gut microbiome. Beans and legumes are rich sources of fiber and are crucial in developing bifidobacterial microbiomes. Bifidobacteria are helpful bacteria that enhance gut health by preventing inflammation and indigestion.

When food undergoes fermentation, bacteria and yeast break down all its sugars. Fermented foods are rich in lactobacilli, a beneficial bacteria. Yogurt, miso, kimchi, cultured milk, and sauerkraut are fermented foods that enhance the composition and function of beneficial gut microbiomes.

What’s more, regular consumption of yogurt and fermented foods reduces the concentration of Enterobacteriaceae, bacteria that cause gut inflammation, and a host of other chronic gut complications. However, consuming only plain and unflavored yogurts is advisable to enjoy gut health benefits. Flavored yogurts contain high amounts of artificial sweeteners, which raise blood sugar levels and favor the growth of Enterobacteriaceae. Ensure you read product labels of all yogurts to understand their ingredient compositions.

Breastfeed your baby for at least six months

Bottle feeding infants with commercial baby feed formulas alters the gut microbiome resulting in a lower density of bifidobacteria. More importantly, breastfeeding lowers the risk of obesity, allergies, and health complications. These complications usually arise due to alterations in the gut microbiota.

Consider switching to a plant-based diet.

Polyphenols have many health benefits, including reducing gut inflammation, lowering cholesterol, and oxidative stress in the human body. However, human cells are incapable of digesting polyphenols. Instead, the plant compounds eventually find their way to the colon, where gut bacteria break them down and digest them. Popular sources of polyphenols include red wine, cocoa, dark chocolate, onions, and almonds.